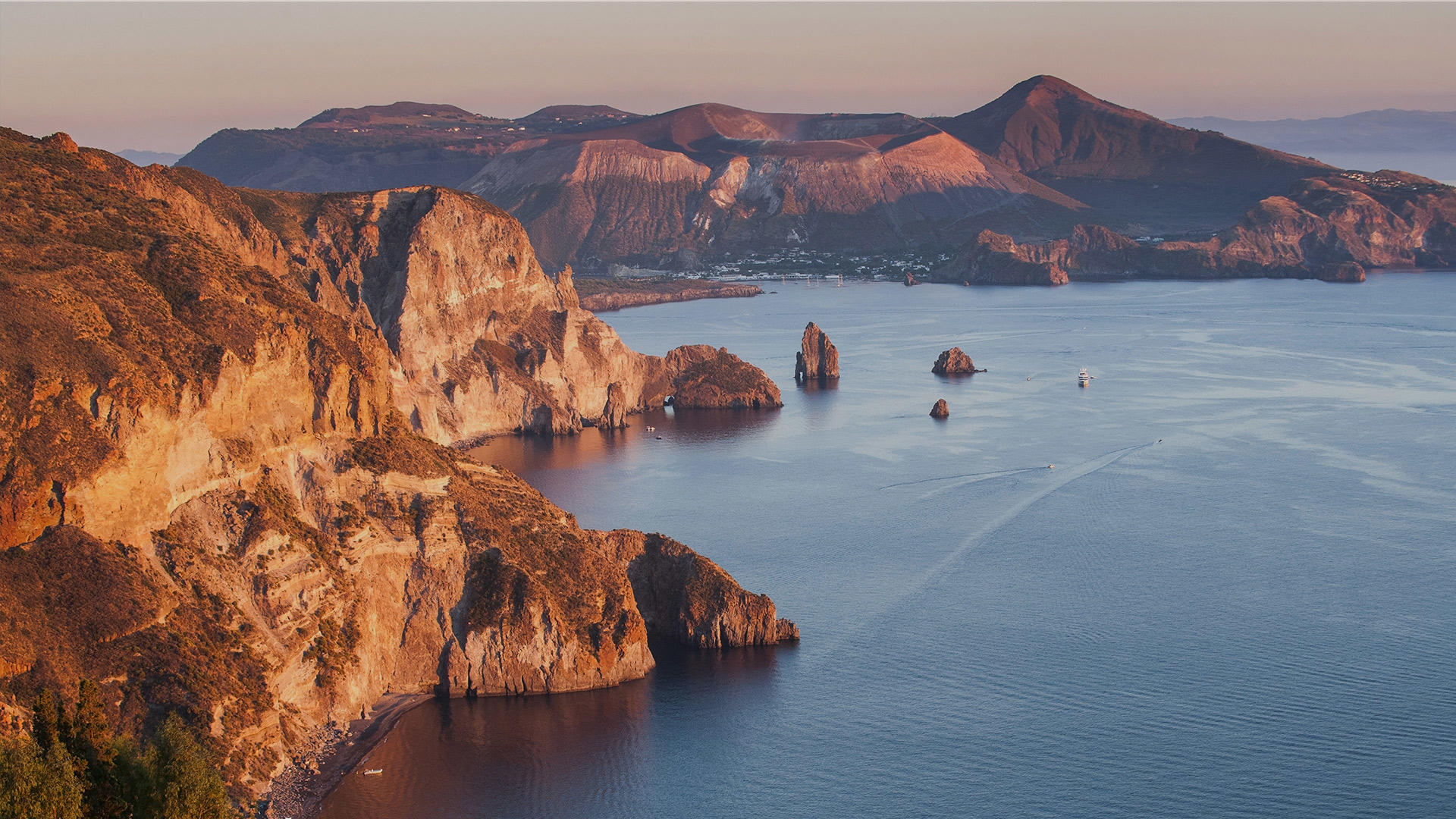 Known as the “seven pearls of the Mediterranean”, the Aeolian Islands are places of mysterious charm. Lipari, Salina, Vulcano, Stromboli, Filicudi, Alicudi and Panarea form an archipelago along with a scattering of islets and rocks that emerge from the sea. The Aeolian Islands take their name from the God Aeolus, undisputed master of the winds. All of volcanic origin, they are located in the southern Tyrrhenian Sea, off the northern coast of Sicily, facing the Tyrrhenian coast at Messina. To get to know them all, one by one, would take a long time, so we offer you a selection of the most beautiful beaches on each island.

Because the entire island is studded with little wild niches and breathtaking sandy swathes, it is extremely difficult to choose one of Lipari’s beaches as the “most beautiful”. One of the most suggestive and imposing of all is the Spiaggia Bianca, located in Porticello, a hamlet on the northeastern coast, where in days gone by pumice and obsidian stone extraction companies operated. Thanks to these quarries, the beach was formed out of white pebbles and fragments of black obsidian. The sea here is an intense turquoise colour, the seabed rich in pumice stone sediments creating an unusual interplay of colour in the sun’s rays. From the beach, you can still see the old jetties used in the past to transport minerals extracted from the obsidian and pumice quarries. The White Beach is not only a picture-perfect landscape; over the years, it has been equipped to meet tourists’ needs. It is suitable for families with children, as well as for people with disabilities. Sunbeds and umbrellas are available for rent, and a variety of bars and restaurants suit all tastes around the beach.

Pollara beach is located in the municipality of Malfa, at the northwestern tip of the island of Salina. Hidden away, the beach is protected by steep cliffs that overhang the sea, which were once part of the crater of a now inactive volcano. Imposing reddish cliffs behind the beach are the hallmark feature of the beach’s undisputed beauty. As well as making it unique, these cliffs shelter the beach from wind, leaving its waters always unruffled and clear, with beautiful turquoise glints. The beach is formed by a short expanse of pebbles and dark gravel. It has no facilities, making it more suitable for people keen on wild places and the island’s intrinsic intimacy. The beach may be reached along a steep path, about thirty minutes from the town of Pollara. This location is also one of the Aeolian Islands’ most famous places, after featuring as a location for Massimo Troisi’s film masterpiece “Il Postino”.

This is certainly one of the most amazing beaches in Sicily, a real natural treasure along a bay. Thanks to its volcanic origins, the sand is dark in colour, tending to black. The water that laps the sand is on the contrary bright and clear, a perfect blend of black and turquoise. The shallow seabed is lava stone. The beach is beautiful by day, but it is especially so at sunset, when the sun’s red reflections are heightened by the black sand and turquoise waters. It is a truly perfect spot to admire the whole bay and the majestic rocks in the background. Although you can rent sunbeds and umbrellas, the beach has limited facilities, and still remains natural and wild. The nearby village beckons for a wander around bars and restaurants to taste typical local produce.

In about 15 minutes, an ancient rocky path with sheer drops down to the sea leads from the village of Ginostra to Lazzaro beach, one of the wonders of Stromboli. Located in the south-west of the island, the beach is formed out of large dark lavic rocks that over time have been smoothed by the forces of rough weather. The sea here is no longer turquoise but a fierce and deep blue. The seabed is among the most beautiful in the Aeolian Islands, thronged with fish of many different species including moray eels, cephalopods, small grouper and more generally sedentary and den species. The beach makes an ideal spot for diving: because entry into the sea is not particularly difficult, it is also suitable for divers who are inexperienced swimmers. With no facilities, this beach is less crowded than others, blending its beauty with feelings of tranquility and intimacy.

In the southernmost part of the island, the beach at Capo Graziano is one of Filicudi’s flagship beaches. Located on the Cape Graziano promontory, it is connected to the rest of the island by a tongue of sand no wider than 500m. Recently, a Bronze Age settlement was discovered here: remains of 25 huts are still visible. Countless other finds have been made at what was one of the largest prehistoric settlement areas in the whole region. The sea here is a clear and deep blue, creeping into beautiful coves that are perfect for exploration by boat. In the right footwear, the hike is not too challenging.

The Riserva naturale orientata Isola di Alicudi is the smallest and most far-flung of the Aeolian Islands, and it is a protected area. The ideal way to discover this island is by boat. Indeed, almost all of the island’s beaches are accessible by boat only. One of the most incredible views of the island is a panorama of the high, jagged coastline typical of the place. To relax and enjoy the sea here, head for the beach at Bazzina, not far from Alicudi Porto. This little cove is named after the district of the same name. The pebbly shore is surrounded by shallow, crystal clear waters, making it an ideal destination for people who love the seas in this part of the world.

Calcara beach is located in the north of Panarea island, at Iditella, where most of the islanders live. The peculiarity of this place, and the reason for its great natural heritage, is that it stands on an extinct crater; here, as well as the view you get to enjoy the vapours of the volcano and its harmless fumaroles as it warms the ground up. The most stunning island views may be had from Calcara, making it an ideal place to admire the volcano of Stromboli and its colours.

Where to stay in Sicily.

For a great place to plan wonderful trips around the islands, or to tour Sicily’s most beautiful seaside areas, stay at UNAHOTELS Naxos Beach Sicilia, a truly unique hotel with a private beach that offers beachside access without the summer crowds, four swimming pools and sports facilities to suit all tastes. The hotel is surrounded by a citrus grove that fills the surrounding area with its scents and colours. It also boasts restaurants and bars for sampling typical Sicilian products and dishes. An alternative is L'Ariana Isole Eolie | UNA Esperienze, hotel with a privileged view of the sea of Sicily, perched on a cliff overlooking the blue sea of the island of Salina. This historic villa of the early '900 carefully restored represents the jewel in the crown of the charming village of Rinella.