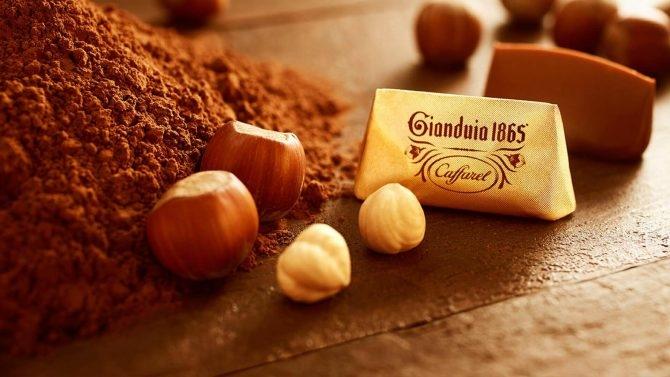 The origins of “gianduiotto”, the chocolate of Turin

Crispy outside and creamy inside: we are not talking about a simple chocolate, but the very famous “gianduiotto“. The typical chocolate-flavored little sweet is originary from Turin and it’s consumed all over the world thanks to its exquisiteness; not everyone knows, however, that its origins tell a compelling story that involves both political issues of the nineteenth century and more cheerful themes such as the 1869 Carnival party.

Cocoa conquered the Piedmontese capital three centuries before the birth of the gianduiotto. The relationship between Turin citizens and chocolate began in the middle of the sixteenth century, precisely in 1559: returning from Le Cateau-Cabrésis, where the homonymous peace treaty was signed, Emanuele Filiberto returned to Piedmont bringing with him the first cocoa beans.

The inhabitants fell in love at first sight: initially and for many years, consumption was limited to a liquid chocolate drink obtained from the seeds. But to have the first real chocolate, we had to wait until 1826. At that time, Paul Caffarel, an entrepreneur of Waldensian origin, owned a sweet factory in the San Donato district of Turin, where he perfected a machine that allowed him to produce the first chocolate: solid chocolate obtained with the cocoa mixture, water, sugar and vanilla. However, there was a need to use different ingredients together with cocoa soon, due to the Continental Bloc wanted by Napoleon Bonaparte; with this decree, the French emperor prevented for about ten years any mooring of English ships on territories under French control. Turin was under French rule and the British were the biggest cocoa’s importers of that time: integrating stocks with other ingredients became a necessity. In fact, despite the Block, the consumption of chocolate did not slow down: in those years in Turin, the chocolatiers produced about 350 kg of chocolate per day. In 1852 Caffarel’s son, Isidore, merged the company with another important confectionery industry, owned by Michele Prochet. Caffarel-Prochet, to respond to the huge demand for consumption, decided to take advantage of a collaboration with nearby Alba, betting on the most famous product of the area: the hazelnut Tonda Gentile delle Langhe.

Prochet had the ingenious intuition to replace the pieces of hazelnut in the dough, making it toasted and grind, making it similar to a cream to which cocoa and sugar were then added. In 1865, Caffarel perfected his creature to which he initially gave the name of “givò“, which means “cigar stub” in Piedmontese dialect and that reminded of a small upside-down boat. The problem was how to make it known to the people without being rejected. At that time, the Carnival was a very popular and appreciated party in Italy, and the masked characters used to throw some sweets to the crowd as they crossed the city with the carts. Then Caffarel decided to exploit the typical “Gianduja” Carnival mask to distribute its “Givò 1865” to the citizens. The people appreciated so much that chocolate candy to turn the name into “giandujotto”: the other big news, in fact, was to distribute the chocolates produced not in the usual boxes, but individually and wrapped in a golden paper on which it was depicted the famous mask of the Turin Carnival. Nowadays, the Langhe hazelnut chocolate is produced all over the world; I wonder if we could have tasted it without Napoleon.
Gianduja