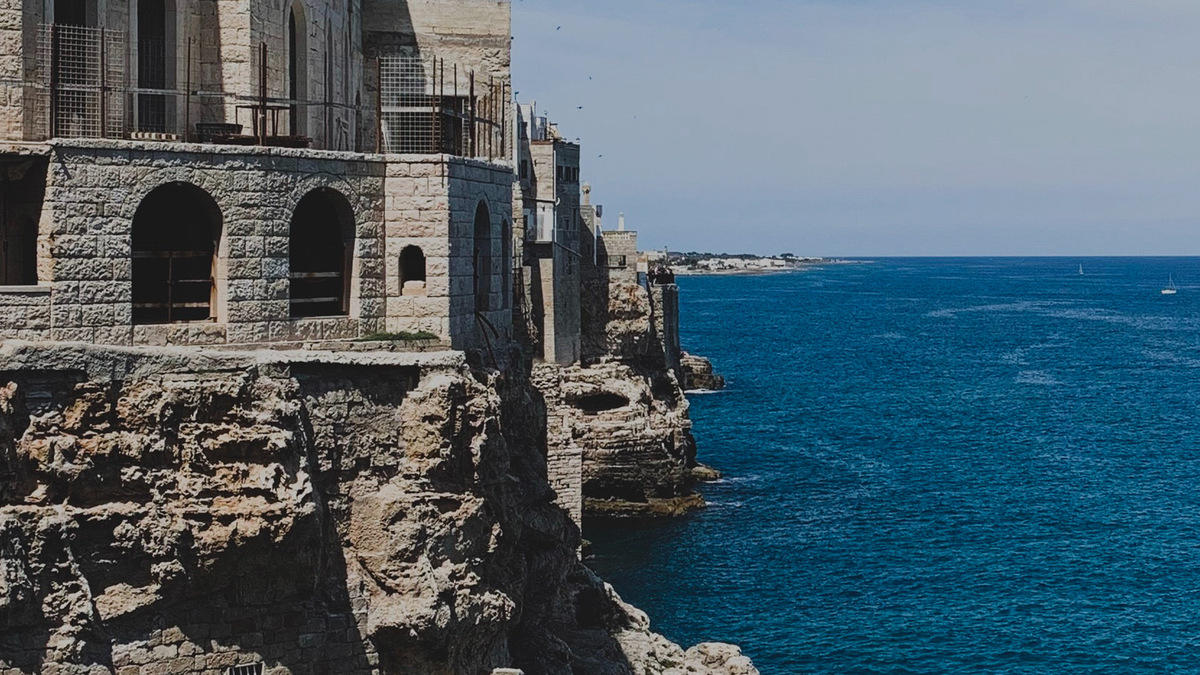 History and Legend at the Castles of Southern Italy

Perched on cliffs and headlands, their towers rising high, Italy’s impressive fortresses are rife with tales and legends

“Once upon a time...” How many beloved fairy tales begin with this deceivingly simple sentence? And how many of these tales feature a castle?
Come with us on a fairytale journey to discover Italy’s most evocative and legendary fortresses.
Medieval, Gothic, Norman, along the coast or perched high in the hills, Italy’s castles are an amazing heritage, enchanting at any age.
Here are some castles that are well worth seeing in Southern Italy.

The little seaside town of Aci Castello, just a few kilometers from Catania, is famous for its basalt cliff topped by the castle that lends the town its name. The rock on which the stronghold stands is extremely rare, originating from a marine basaltic volcanic eruption over 500,000 years ago.
The castle was built during Norman times, in 1076, out of black lava stone. It was home to Roger of Lauria, and in 1297 became the residence of Frederick II of Aragon.
Today, the fortress is inaccessible on three sides. It is possible to enter only from the west, through a walled passageway that has replaced the old wooden drawbridge.
Inside, the castle museum exhibits historical finds ranging from prehistoric to medieval times, as well as a dedicated mineralogy section. The castle also boasts an interesting botanical garden with a great variety of plants. 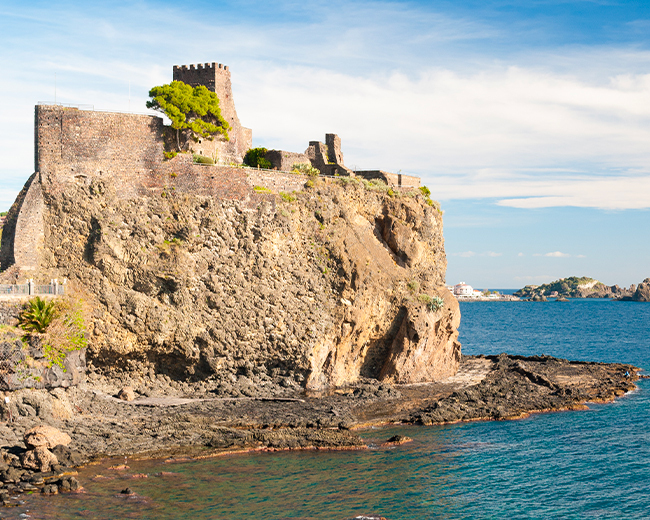 Where to stay in Catania.

For your journey of discovery to the castle at Aci and Catania, we recommend you stay at the hotel Palace Catania | UNA Esperienze. This veritable Sicilian idyll is located in the heart of town, with breathtaking views of Mount Etna and a large roof garden. A historic luxury hotel, it has been faithfully restored to offer modern comforts while preserving its authentic identity.

With 25 centuries of history to its name, the Aragonese Castle on Ischia, a strategic outpost for defending the island, stands out and bears witness to the many civilizations that have come and gone round these parts.
The islet on which it stands was formed some 300 thousand years ago after an eruption. For centuries, it was a safe haven for people fleeing invasion by the Visigoths, Vandals, Arabs, Normans, Swabians and Angevins. Later, it attracted artists such as Michelangelo, Ariosto, Jacopo Sannazaro and Giovanni Pontano.
In the days of the Parthenopean Republic, the castle became a political prison. In the early 1800s, it was reduced to a pile of rubble after clashes between the Bourbons and the French.
Since 1965, the Mattera family has been campaigning for the fortress to return to its former splendour, undertaking impressive restoration works that have made it possible to re-open the castle to the public. 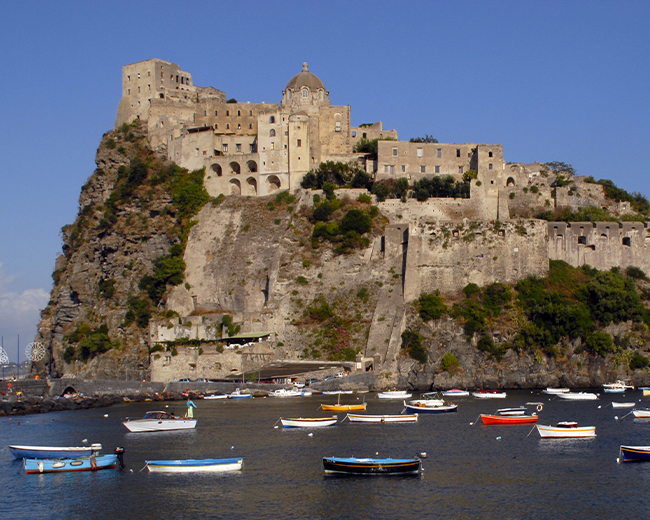 Castel dell’Ovo is located on the islet of Megaride, the strip of land on which the history of Naples and its ancient civilization all began. Known today as Borgo Marinari, the cliff is one of Naples’ most characteristic and best loved places, especially of a summer evening. The islet is connected to the mainland via a bridge that joins it to the enchanting Neapolitan seafront.
Castel dell’Ovo is the oldest castle in Naples. Its history dates all the way back to the Roman Imperial age. In Virgil, reality and legend combine in his description of a castle held up by a magic egg. According to the poet, as long as this castle remains intact, the city will be protected from any misfortune. 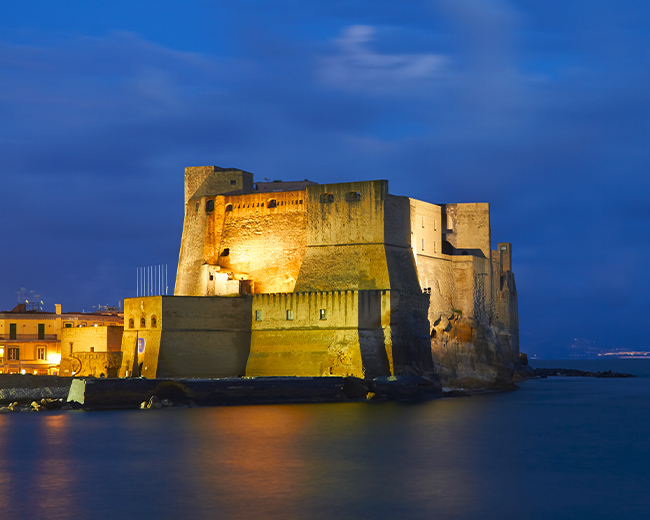 Where to stay in Naples?

To visit Naples, Ischia and their castles, we recommend you stay at the Gruppo UNA UNAHOTELS Napoli. Housed in a historic building, this property is an ideal location for authentic Neapolitan life.

The Castle of Otranto is a fascinating fortress built to ward off eye Saracen attacks. To this day, it watches over Italy’s easternmost city, now as a treasure trove of culture.
The 1480-81 War of Otranto, pitting Turkish General Gedik Achmet Pasha against Don Alfonso, Duke of Calabria, marked the fate of the castle of Otranto. Afterwards, Alfonso of Aragon completely fortified the city so that it could defend itself from future enemy attacks.
The Castle of Otranto also played a starring role in early literature, its name gracing the first Gothic novel in history: Horace Walpole’s 1764 work, “The Castle of Otranto”, which spawned the Gothic literary genre popular in the late-eighteenth and early-nineteenth centuries. 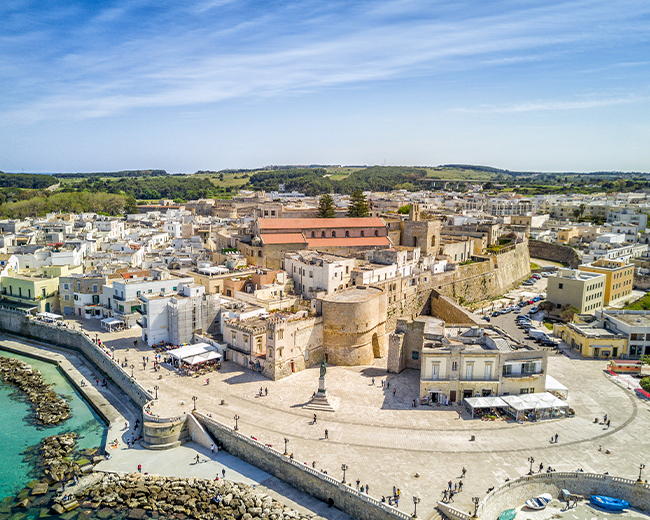 Castel del Monte is one of the most magical places in Italy. Sixty kilometers from Bari, in 1996 it received UNESCO World Heritage site status. Built out of quartz and limestone, the fortress here is not only a splendid example of medieval architecture, it is shrouded in magic and esotericism.
Because of the strong symbolism that swirls around it, we cannot be certain whether the castle was originally built by Richard of Lentini or Frederick II, Emperor of the Holy Roman Empire. Legend has it that the fortress was a temple of knowledge dedicated to the study of science.
An ancient legend associates the castle’s origin with an inscription at an ancient temple, where a statue’s head bears the following sentence: “My head is made of bronze but at the crack of dawn in May it shall be golden”. One day, a Saracen solved the mystery: on the first day of May, at sunrise, he began digging where the shadow of the statue fell, and there found valuable, ancient treasure… which was used to build the castle. 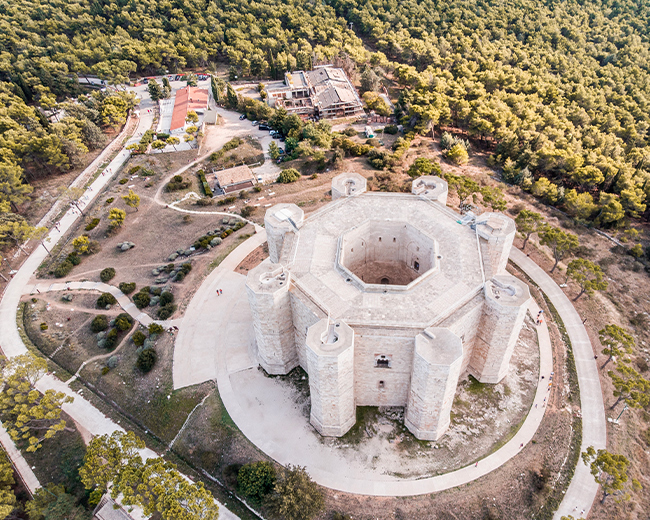 Where to stay in Puglia.

If you’d like to visit Castel del Monte from Bari, we recommend staying at Gruppo UNA UNAHOTELS Regina Bari, where you can experience all of Puglia’s charm. Architecturally inspired by ancient Apulian villages, the property’s wide range of amenities includes the famous Noha restaurant, which serves traditional Mediterranean and Apulian specialties in a picturesque setting. 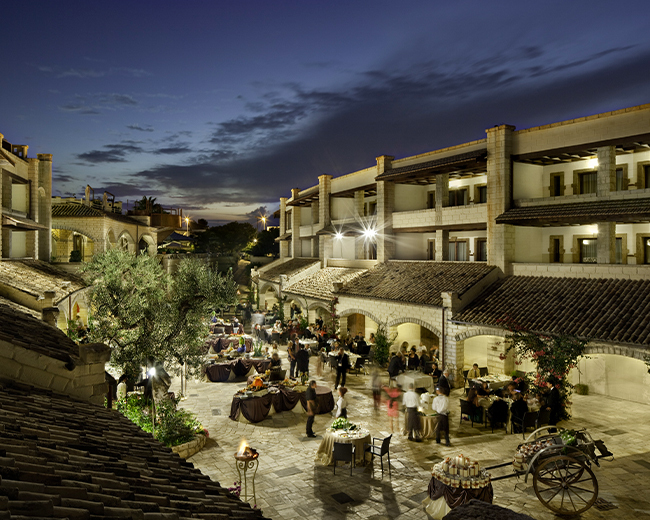